The Devil is in the White Spaces by Jerry Wragg 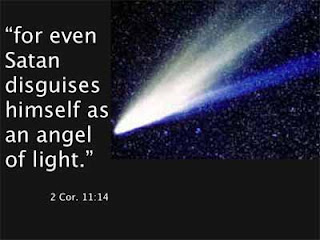 "Second Timothy 4:3 predicts that “the time is coming when people will not endure sound teaching.” Too often people assume these opening words to mean that one day, as evangelical ministry marches on with expansive gospel-momentum, a blatant, rather foul stench straight from hell will mount an offensive against sound doctrine so sudden and obvious that all who love Christ will cry out in unison, “Condemn the heresy!” If only that was the way it worked.

Instead of opposing the truth with blatant lies, Satan does a far greater work in the white spaces between Paul’s words. When the apostle warns that “a time is coming,” we shouldn’t imagine a sudden plunge from the heights of doctrinal precision, but rather a slow, imperceptible decline via subtle spiritual optical illusions. The enemy knows that discerning shepherds would never allow their sheep to suddenly deny truth and turn aside to doctrines of demons. His tactics have to be implemented over long periods of time, introducing slight, unnoticeable deviations to the truth. So just exactly how was the enemy able to bring us to the place where we no longer endure sound, in-depth preaching and teaching, and yet celebrate casual conversations with false teachers?

Here’s a sketch of Satan’s scheme:

(1) Cultural degradation pressures the church to morally drift along with it, and believers, eager to promote peace and perpetuate “our way of life,” begin to compromise.

(2) Meanwhile, pastors shrink from declaring the whole counsel of God to accommodate this increasingly worldly admixture of ideas the sheep are embracing.

(4) The church begins to explore less challenging “styles” of teaching, emphasizing aesthetics and form over substance–the response from an already dulled populace of church-goers is overwhelmingly positive, and moral unbelievers become quite attracted to it!

(5) Oratory skill and charisma are elevated as the most sought-after traits for teachers and leaders, with Bible knowledge and theological skill a distant second.

(6) With the masses getting what they most want and the new teachers elevated much faster than their proven predecessors, everyone seems thrilled and numbers are swelling.

(7) Proven shepherds/theologians are slowly, almost imperceptibly marginalized as the new movement assumes its that trajectory is God’s work of rescuing the church from its narrow ineffectiveness.

(8) Perhaps because of the fear of man or a desire to help “reign in” this new frontier of ministry, some veteran pastors begin endorsing the new crop of leaders as though these unproven youngsters are already tested peers of pastoral wisdom and theological discernment.

(9) They appear at conferences together, promoting “dialogue” over their differing approaches to ministry. Such dialogues, far from being forums where wiser pastors bring reproof and correction to younger men, are platforms where unchecked opinions flourish.

(10) As serious concerns are raised by mature churchmen, younger, less skilled men shroud their obvious immaturity and ignorance in flattery, pointing to their popularity and sheer numbers as the truest test of legitimate influence.

(11) Rather than promoting caution and correction, the endorsement of highly respected leaders becomes another badge of pseudo-scholarship and acceptance; their constituency applauds.

(12) Others, even those of global influence and proven biblical skill over many decades, are summarily declared “out of touch” and only minimally useful.

(13) Preaching radically shifts in its purpose and primary features, from powerful doctrinal precision and exhortation to the search for relevance and meaning in human drama and Bible-sprinkled opinions, though, oddly, still vigorously defended as traditional exposition.

(14) True Bible exposition is simply no longer “endured,” and the average appetite of true Christians bears little resemblance to that of previous generations.

(15) Those immersed in this mindset are not able to endure sound doctrine, discern between truth and error, or experience lasting power over sin. And what is the assessment of their leaders? They are a new generation of men called and appointed by God as the truest voices of evangelicalism, and they are the generation who’ve come to understand the essentials of ministry. Their popularity is trump-card proof against all nay-sayers.

Evangelicalism is not alive and well, and notorious church leaders (of the younger variety) are rarely skilled expositors. Those with the most bravado are usually the most theologically inept, and the crowds of professing believers who enthusiastically follow these Vegas-style pastors are not becoming more biblically discerning but less!

We didn’t arrive here blatantly, but by Satan’s slow, lethal injection. Jesus’ response? 'You were warned!'"

Jerry Wragg is one of our ten TES campus pastors, having served as the Pastor-Teacher of Grace Immanuel Bible Church in Jupiter, FL since 2001. Jerry also serves as Chairman of The Expositors Seminary Board of Directors.
Posted by ck at 12:00 AM