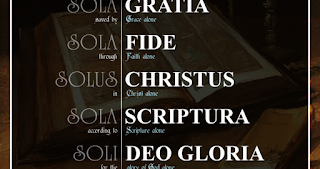 "I (Pastor Phil Johnson) in Finland to speak to a group of Reforming church leaders on the subject of sola Scriptura. The conference here started tonight. I'll be covering topics like the authority, accuracy, and sufficiency of Scripture. I'll also be highlighting the dangers of vesting too much authority in ecclesiastical tradition—especially when our traditions might burden or obscure the simplicity of the gospel. Or worse yet, in some churches and denominations, long-treasured church traditions have often been used to adjust or nullify clear statements of Scripture (cf. Mark 7:13).

To be clear: I am not one of those who thinks we need to jettison every order of service, structure, or interpretation of Scripture that has some pedigree in church tradition. (I'm not an organoclast.) I would be the very last person to advocate ignorance of church history, show sneering contempt for the very idea of tradition, or recommend a haughty, overweening attitude toward godly churchmen and their beliefs and practices from past ages. Tradition has a legitimate place in the church; but that place is not near the top of the hierarchy.

Anyway, while I was at dinner with conference attendees tonight, a friend in America texted me a question about those very issues. He was asking if we could have an extended conversation when I get back in the office. I'm looking forward to that. Meanwhile, I thought his question so good and the issue so important that I decided to answer him briefly with a text message on the spot. My Finnish friends around the table were engaged in conversation with one another, so I thought I could dash off a quick reply without being impolite.

Wrong. My reply became a bit longer than planned, and by the time I finished thumb-typing, I was the only one left at the table. So with apologies to my Finnish hosts to whom I was unintentionally rude, here's my reply to my friend's question. My answer should give you sufficient clues to discern everything you need to know about the gist of what he asked. Here you go:

Short answer: as in all structures, authority is definitionally hierarchical. I think well-established ecclesiastical traditions can carry some authority, but never in a way that trumps the Bible.

In other words the practice and teachings of our spiritual forefathers ought to be studied and taken seriously, and though they have no authority to challenge or add dogmatic articles of faith to what the Bible teaches, certain traditions do have more authority than whatever "God told me this morning. . . "

I think one of the besetting sins of the current generation(s) is a tendency to ignore the voices of godly men who preceded us.  Sola scriptura properly understood is not a recipe for each person arriving at his or her own interpretation of the text without any insights gleaned from commentaries, reference works, or the history of what godly men and councils have said in the past. (The notion that me and my Bible are all the instruction I'm willing to heed is what I would typically refer to as "nuda scriptura rather than sola Scriptura.")

In short, if I arrive at a belief or interpretation that no one before me has ever seen, my assumption should be that I'm probably wrong.

On the other hand, the danger of placing too much weight on tradition was shrilly rejected by Christ himself, so I'm inclined to think the greater danger lies there. But there's a deep, deadly ditch on both sides, and it behooves us to stay between those ditches."

Article written by Pastor Phil Johson.  Phil oversees Grace To You and is an elder at Grace Community Church.  Phil is one of the clearest voices on the world wide web today.
Posted by ck at 12:00 AM