Regarding "Sexual Orientation," Evil Desire, and the Question of Moral Neutrality. (Is Same Sex Attraction ok?) 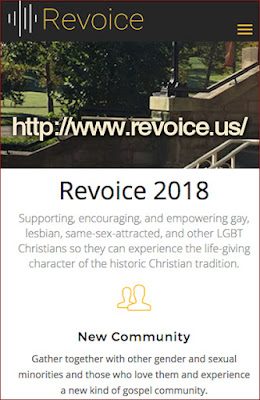 Regarding "Sexual Orientation," Evil Desire, and the Question of Moral Neutrality by Pastor Phil Johnson.  "Full disclosure: Here is the development that finally provoked my sense of consecrated indignation enough to motivate me to start blogging again: REVOICE? It's the latest "evangelical" superconference. As you see, their own ad copy tells us they are devoted to "supporting, encouraging, and empowering gay, lesbian, same-sex-attracted, and other LGBT Christians so they can experience the life-giving character of the historic Christian tradition." The conference is being organized and supported by a large cast of evangelical thought-leaders—including some people generally assumed to be sound and reliable spiritual guides.

Fred Butler blogged about it yesterday, and it'll save me some work if you read his assessment of the actual conference itself. (You may need a translator for the cornpone-and-pot-likker dialect he slips into occasionally, but the cardinal points he makes are unassailable.)

Anyway, I want to comment on the conference's underlying theory,because it strikes me as a Really Bad Idea (and a patently unbiblical opinion). Nevertheless, it seems to be gaining traction rapidly—even among many influential and hitherto trustworthy evangelical leaders. It's the notion that homosexual orientation is morally neutral. The claim being made is that gay desires are not really sinful unless they are acted upon. So a person can fully self-identify as lesbian, bi-sexual, gay, transsexual, gender-fluid, or otherwise "queer" and be a church member in good standing—as long as he, she, xe, (or whatever) remains celibate.

I first began to realize realized how widespread that idea has become in the evangelical community two years ago, when the following Tweet was posted from the official Twitter account of The Gospel Coalition (TGC):  "It's more masculine to be attracted to men yet obedient to God than attracted to women and disobedient to God."

I referred to TGC's Tweet as a "hazy, misleading sophism" and added, "Lusting for something sinful is not 'obedien[ce] to God.'" A long argument ensued, with several friends on my FaceBook page and lots of my Twitter followers expressing shock and surprise that I would hold an opinion so egregiously out of step with postmodern political correctness. The "proper" postmodern opinion was succinctly stated by an exasperated commenter on my FaceBook page: "Desires are neutral until they are used sinfully," he wrote. "DESIRES ARE NEUTRAL UNTIL THEY ARE USED SINFULLY- see Romans 6:12-14"

I fear that idea is finding currency among leading evangelicals. But it is dead wrong and subversive to genuine holiness. Scripture is chock full of statements emphatically condemning evil desires—from the Tenth Commandment (Exodus 20:17) to Jesus' words about mental and visual lust in the Sermon on the Mount (Matthew 5:27-29). What, after all, is lust but raw, sinful desire?

Those who argue that LGBT "orientation" is morally neutral often point out that an unmarried heterosexual man's attraction to women isn't necessarily deemed sinful, assuming he remains celibate. Why, then, should we consider a celibate gay man's attraction wrong, as long as he doesn't act on it?

I'd like to suggest two replies to that. First, a celibate heterosexual's attraction to women might indeed be sinful, if, say, he is attracted only to married women or underage girls. It would likewise be sinful if he allowed his interest in a particular young woman to become a fixation that distorts his perception of reality. A perfectly innocent attraction can even become a sinful passion for the person who indulges in immoral fantasies. No sane and reasonable person would try to argue that heterosexual desires are always wholesome. Second (and this is pretty straightforward:) Scripture says inordinate affections are sinful and commands us to mortify them (Colossians 3:5). I didn't make that up.

But my Bible uses the expression "evil desire" in Colossians 3:5. How do I know if a desire is "evil"  In short, Scripture teaches plainly that any desire is sinful if it entails a wish for what we cannot righteously have.

Far from "supporting, encouraging, and empowering" people with perverse sexual desires, Scripture repeatedly urges us to repent of all sinful desires—especially those wicked sexual passions that so easily entrap young minds (2 Timothy 2:22; 1 Peter 2:11). All of us—not just LBGTQ folk—are commanded to renounce and mortify every desire for anything God has forbidden. Those who think people beset with perverse desires can wear their peculiar lusts as badges of group identity merely demonstrate that they haven't a clue what repentance means. Furthermore, to omit or purposely obscure the Bible's clear call to repentance is to show contempt to one's unbelieving neighbors.

Let me be clear: I, too, have friends and close neighbors who identify as LGBT, and I abominate the way some Christians seem to think it's OK to heap unbridled scorn, mockery, or insults on them. All our neighbors should be shown Christlike, loving compassion with the dignified respect that befits anyone who bears God's image.

But to encourage them in their sin or offer them the false comfort of approval for their sinful desires is a serious breach of the Second Great Commandment.

Let's not try to make any sin seem less wicked than it is.

I would not necessarily single out homosexuality as the chief example of abominable sin if our culture didn't constantly insist on treating homosexual desire as a privileged category. Sodomy is only one of several notoriously odious abominations, and Jesus expressly said the hard-hearted unbelief of those who have actually seen and know the truth is a worse sin than all the evils of Sodom (Matthew 11:24).

Furthermore, I'm happy to assert, emphatically, that any evil attraction is appallingly sinful, including that heterosexual tendency to want to click on clickbait when the link features a picture of some scantily-clad tart.

But this one class of sins (LGBT etc.) is the only one that demands special status and unconditional affirmation.   So perhaps the main point I want to make will perhaps be clearer if we consider one of the sexual perversions that hasn't yet successfully lobbied for social acceptance and special rights.

Here's a real-life example:  During my first year at Grace to You (1983), a man wrote our ministry looking for affirmation and encouragement. He wanted us to agree with his belief that mere attraction to a forbidden object is not inherently sinful. He gave a convincing testimony about his conversion from a life of sin and rebellion. He said he was now serving as an AWANA leader in his church. Then he got specific about what he was asking us to sanction.

He said he felt sexually drawn to "large farm animals." (Those were his exact words.)

I wrote back, citing Matthew 5:28, and told him it is our position that the desires he was describing are not morally neutral at all but a sinful perversion that he needed to repent of and vanquish through the means of grace. I'd give him the same answer today, even after reading reams of sophisticated evangelical reasoning trying to argue that "attraction" and "lust" are categorically different.

One other point needs to be made before I wrap this up.  People sometimes suggest that all sin is equally vile. That's simply not true. It's true that all sin is damnably wicked, but Jesus Himself made clear that some sins are worse than others (John 19:11; Luke 10:12-14). And Scripture clearly portrays certain sexual perversions (lesbianism and bestiality among them) as unusually and unnaturally perverse. (See, for example, Romans 1:26-28.)

All of this raises an important question: How far do the culturally-engaged evangelical trend-setters want to take the notion that mere attraction is morally neutral? I hope we'd be concerned about the sanctification of someone who insisted on self-identifying as a pederast living a celibate life. Or my cowboy correspondent who harbored a secret desire for a closer relationship with his livestock. Or people drawn to any number of kinky fetishes too perverse to even talk about (Ephesians 5:12).

Yes, all of us struggle with evil desires. That's part of our fallenness. Even Paul struggled with covetousness—evil desire (Romans 7:7-25). But Paul's whole point was that those desires (even if never acted on) are sins to be mortified, not prize ribbons to be worn as badges of one's identity."

Pastor Phil Johnson is on staff with John MacArthur at Grace Community Church (CA).
Posted by ck at 12:00 AM