Responding to the Social Action Trend in Evangelicalism (pt. 8) 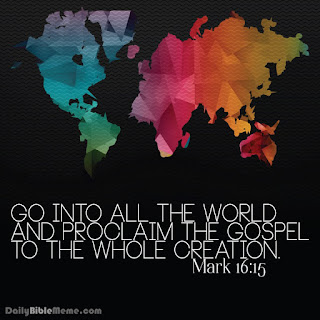 This is part 8 of a series titled, "Regaining Our Focus: A Response to the Social Action Trend in Evangelical Missions" by two veteran missionaries from Africa.

8. A Willful Blindness to How the Early Church Fulfilled Jesus’ Commission(s)

Jesus’ various commissions to the disciples leave no room for making social action an equal partner with gospel proclamation, church planting, and theological training. In fact, Jesus’ instructions to His followers after His resurrection focused exclusively on making disciples through evangelism and teaching. “Go therefore and make disciples of all the nations, baptizing them in the name of the Father and the Son and the Holy Spirit, teaching them to observe all that I commanded you . . .” (Matt 28:19–20). “Thus it is written, that the Christ would suffer and rise again from the dead the third day, and that repentance for forgiveness of sins would be proclaimed in His name to all the nations, beginning from Jerusalem. You are witnesses of these things” (Luke 24:46–48).

Realizing that social action is conspicuously absent from the commissions recorded in Matthew and Luke, John Stott draws attention to Jesus’ commission to the disciples in John 20:21, “As the Father has sent Me, I also send you.”  Stott interprets this statement to mean, “The Father sent Me to evangelize and to heal the sick and help the poor; therefore, I am sending you to do both as well.” Clearly Stott tries too hard to find social action in this text. The Father’s authoritative sending of Jesus (the co-eternal, co-equal Son) into the world is a dominant theme in John’s Gospel (John 3:16–17; 5:24, 30, 36–37; 6:44, 57; 7:28–29; 8:42). In light of this, no complicated explanation of John 20:21 need be sought: as the Father authoritatively sent the Son (and as the Son submissively obeyed), so Jesus now authoritatively sends His disciples.  The issue is authority and obedience, not the content of the mission. (In fact, much of Jesus’ mission—such as His substitutionary death—was irreproducible.) In fact, if Jesus’ commission in John 20:21 was a veiled encouragement to carry out a dual-track mission in the world (evangelism and social justice), then the apostles clearly failed to understand Jesus. Peter summed up his interpretation of Jesus’ commissions this way: “He ordered us to preach to the people, and solemnly to testify that this is the One who has been appointed by God as Judge of the living and the dead” (Acts 10:42). As one untimely born, the apostle Paul received his commission from Christ years later; nonetheless, Jesus’ words to Paul on the road to Damascus (and Paul’s subsequent obedience) are strikingly familiar: “But get up and stand on your feet; for this purpose I have appeared to you, to appoint you a minister and a witness. . . . to open their eyes so that they may turn from darkness to light and from the dominion of Satan to God, that they may receive forgiveness of sins and an inheritance among those who have been sanctified by faith in Me.” “So, King Agrippa, I did not prove disobedient to the heavenly vision, but kept declaring both to those of Damascus first, and also at Jerusalem and then throughout all the region of Judea, and even to the Gentiles, that they should repent and turn to God, performing deeds appropriate to repentance” (Acts 26:16–20).

The Book of Acts reveals that the apostles and the early church fulfilled Jesus’ instruction with an astonishing single-mindedness of purpose, preaching the Word of God for the salvation of sinners and the edification of the saints.

Luke’s summary of Paul and Barnabas’ ministry in Pisidian Antioch, Lystra, and Derbe shows that evangelism for the purpose of starting a church and subsequent leadership training were unequivocally the focus of the early church’s missionary labors:  After they had preached the gospel to that city and had made many disciples, they returned to Lystra and to Iconium and to Antioch, strengthening the souls of the disciples, encouraging them to continue in the faith. . . .When they had appointed elders for them in every church, having prayed with fasting, they commended them to the Lord in whom they had believed. (Acts 14:21–23)

What about the apostles’ social action endeavors? In fact, the only church-organized relief projects mentioned in Acts and the Epistles took place within the church, including the various financial gifts sent by the Greek churches to the impoverished believers in Jerusalem (Acts 11:29–30; Rom 15:25–26; Gal 2:10) and widow care (Acts 6:1–6; 1 Tim 5:3–16).51, 52 In short, the deacons of Acts 6 were ministers to the church, not missionaries to the world.  And even when it came to these valuable intra-church relief efforts, the apostles deliberately avoided becoming personally enmeshed in the demands and distractions of organizing them (e.g., Acts 6:2–4; 1 Cor 16:2). Their reason is obvious. As one social action advocate notes, “In the global urban context, doing justice requires an increasingly complex set of skills within the fields of community development and community organizing. Social action ministry is not something a pastor or a missionary does on the side for ten minutes a week.

This doesn’t mean that the early Christians showed no concern for the needy outside the church. Far from it. For example, personal ministry to widows outside the church apparently did take place. There can be no doubt that believers in the book of Acts met "pressing needs" (Titus 3:14) by caring for the orphans, widows, and poor who were part of their lives, thus fulfilling Paul’s instruction: “While we have opportunity, let us do good to all people, and especially to those who are of the household of the faith” (Gal 6:10). Loving the hurting people around us is a normal part of daily Christian living, an expected fruit of gospel proclamation. However, there is no evidence that the apostles tried to make social relief the face of the church or that social action projects were part of their Great Commission strategy.

We are eager for the reader to understand that we encourage such love in our own churches. For example, people in our congregations are employed at orphanages, teach Bible studies for orphans, volunteer at a hospice, run a school instructing underprivileged African farmers, minister in prisons, sponsor theological training for needy pastors, have created a food–for–trash program for street children, and a host of other mercy efforts. They do these things because they are Christians, fulfilling Gal 6:10, not because the church corporate is called to organize and run social action programs.

The apostle Paul’s long-anticipated mission to the city of Rome provides an enlightening example of the apostles’ systematic (and if the social justice proponents are right, inexplicable) disregard for making social action an equal or significant partner with gospel proclamation. In Paul’s day, Rome was a sprawling metropolis with over a million residents, and its social woes were equivalent to or worse than those of any modern city. Poverty was rife and there was a massive gap between the elite rich and the desperate poor. Unemployment hovered at catastrophic levels, with up to two hundred thousand people in the city regularly (and all-too willingly) living off state-sponsored welfare.  The living conditions in Rome’s disease-ridden slums were abysmal; crime, prostitution, and slavery were a normal part of life.

What would the Apostle Paul’s letter to the Romans have looked like if it were written by one of today’s evangelical social justice advocates? I can’t wait to come to Rome to lead the charge of Christ-centered social justice! Deed must precede word! We need to proclaim Christ’s love for the city by working to improve the general civility, race relations, and social conditions of Rome. We need to eradicate slavery and poverty; we need to start orphanages. The cynical people of Rome won’t listen to the gospel unless we first help them flourish socially and economically. But if the church organizes a series of community-based services to eradicate unemployment and to uplift the disadvantaged, then we’ll see the city of Rome transformed.

Of course, what Paul actually wrote was, “So, for my part, I am eager to preach the gospel to you also who are in Rome. For I am not ashamed of the gospel, for it is the power of God for salvation . . .” (Rom 1:15–16; see also 10:14–17). The gospel that Paul went on to describe in Romans is a gospel of sin, wrath, the cross, repentance, faith, and forgiveness—not one of social improvement and human flourishing.

Paul was not lacking in compassion. In Gal 2:10 he wrote, “They only asked us to remember the poor—the very thing I also was eager to do.” However, although Paul was fully aware of the social conditions that prevailed in any large city of the Roman Empire, including Rome itself, he gave no attention to a social action missions strategy.