The Sin that Became an Evangelistic Technique 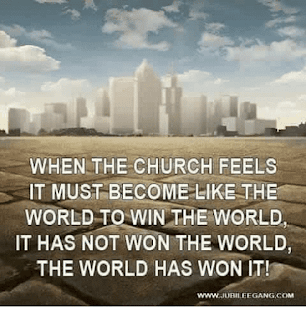 "Never in its history has the evangelical church been more intentional and more systematic in its efforts to imitate the world than in our day. In fact, worldliness, which used to be a sin-to-be-avoided, has not only become an obsession for the church, today it has become the evangelistic technique of choice.

In the Old Testament, God told Israel, “You shall not do what is done in the land of Egypt where you lived, nor are you to do what is done in the land of Canaan where I am bringing you” (Lev 18:3). In the New Testament, the apostle Paul told the church, "Do not be conformed to this world" (Rom 12:2). Nonetheless, today’s self-appointed evangelical relevance experts tell us that the only way to reach the world is to be like the world: we must talk like them, dress like them, be entertained like them, sport tattoos like them, address human sexuality like them, and so on.

Jesus said, “If you were of the world, the world would love its own” (John 15:18). Clearly Jesus expected His followers not to be mirrors of the world. However, today in a bizarre inversion of Jesus’ intention, the goal of many evangelicals is to be as much like the world as possible in order to be loved by the world, purportedly as a precursor to evangelism.

In the words of John MacArthur, we are being told that, “If we can convince them that our message poses no threat to their way of life and that they have nothing to fear from Christ, perhaps we can then...reach them.... [We must persuade] them that church is fun, Christians are just like everyone else, and they have nothing whatsoever to fear from God” (Ashamed of the Gospel, 3rd ed., 214).

Where did this notion come from? In our era, cosying up to the world as a sure-fire evangelistic technique first flourished in youth groups in the 1970s. Eventually, youth pastors like Bill Hybels spawned the church growth movement by packaging an adult version of that strategy. As a result, imitation of the world touched every facet of church life. The church buildings of the church growth movement were intentionally designed to look like shopping malls and corporate headquarters. On the inside they were laid out to remind “seekers” of rock concerts and coffeehouses. The messages were crafted with worldly desires in mind: light humor, self-help, plenty of sports references, and Hollywood movie clips employed as sermon illustrations.

The next generation—our generation—has gone a step further. Today we don’t design the church to look like a coffee house: cool churches meet in coffeehouses and bars (Grab a brew and share your view is one church’s catchy slogan). And to pull off this new, “We’re just like you” evangelistic technique, Christians have to sport tatts, studs, and drink their share of suds.

Unfortunately there have been two unintended consequences of adopting worldliness as an evangelistic technique. The first is worldly pastors. Kevin DeYoung observes, “To be cool means...pushing the boundaries with language, with entertainment, with alcohol, and with fashion” (The Hole in Our Holiness, 18). The charge toward cool has been led by a young generation of “bad-boy” preachers like Mark Driscoll, always eager to test the fences with their language, risqué comments, and leisure behaviour.

However, it’s becoming clear that preachers who push the boundaries in their sermons do so because they are living beyond those boundaries in their lives. When a preacher spends so much time admiring and courting the world, it has a way of evangelizing him more effectively than he evangelizes it. Ultimately, such preachers don’t sanctify the flock: immersed in an unholy culture, they have no ability to help others escape its clutches.

After worldly preachers, a second unintended consequence of making worldliness an evangelistic technique is worldly parishioners. What’s bad for the pulpit is bad for the pew. If the church’s meeting place, music, message, and evangelism are all crafted to shelter or promote worldliness, it’s not rocket science to figure out that eventually the congregation is going to be worldly. What you work for is what you get. And when you turn worldliness into an evangelistic strategy, what you get are Christians virtually indistinguishable from the unbelievers around them. In fact, at times one wonders if they are even Christians at all.

Where does it all lead? David Garland has written this memorable line about the Corinthian church, the New Testament’s most worldly congregation: “The problem was not that the church was in Corinth, but that too much of Corinth was in the church” (1 Corinthians, 8). If you want to know where worldliness exalted as an evangelistic technique leads, just consider what happened to the church of Corinth when they failed to unhitch themselves from the culture following their conversion.

Among other things, they esteemed worldly philosophies over divine revelation (1 Cor 1:18-21; 2:1-2, 6). Evolution and postmodernism anyone? They adopted the rampant selfism of the culture (4:6-7), and embraced—yes, even exceeded—the culture’s tolerance of gross sexual sin (5:1-2, 6). In light of that, is it any surprise that today’s “cool” churches consistently capitulate on the issue of homosexuality?

The Corinthian church also mirrored the culture’s sex-on-demand attitude (6:12-20) and was promoting worldly ideas about marriage and divorce (chp. 7). Furthermore, the Corinthians’ entertainment habits were a virtual duplicate of the world’s, as they continued to enjoy the drunken and immoral revelry of the feasts at the pagan temples (10:7ff.). And following the lead of the Greek mystery cults, the Corinthian believers mistakenly continued to define spirituality as a state of ecstasy in which one forfeits mental and physical control, slips into trances, and speaks gibberish or inaccurate and uncontrollable prophecies in the name of God (12:3; 14:26-33). That’s where worldliness led the church of Corinth, and it’s not difficult to see the same things happening in churches today.

Evangelism is at the heart of the church’s mission, but how we do it is critical. Simply stated, worldliness produces worldliness, not conversions. It corinthianises the church. To evangelize the world, we must embrace a different tactic, expressed so powerfully by the apostle Paul: “Prove yourselves to be blameless and innocent, children of God above reproach in the midst of a crooked and perverse generation, among whom you appear as lights in the world…” (Phil 2:15).

Joel James has served as the pastor-teacher of Grace Fellowship in Pretoria, South Africa since February 1995.
Posted by ck at 12:00 AM