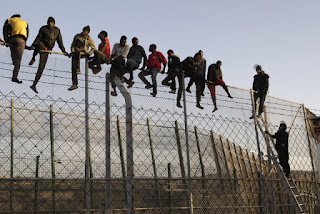 "According to a combined study conducted by three US government departments, immigrants entering the United States illegally are responsible for an extremely high number of crimes. The study was based on a sample of 55,322 illegal immigrants incarcerated in US prisons. Members of this group were arrested 459,614 times—an average of eight arrests per person. About 45 percent of the arrests were for drug or immigration offenses. Another 15 percent were property related—burglary, larceny-theft, motor vehicle theft, and propertydamage. About 12 percent were for violent crimes, including murder, robbery, assault, and sex offenses. The balance of the arrests were for fraud, forgery, counterfeiting, weapons violations, obstruction of justice, and traffic violations, including DUI.23

Another rising problem with illegal immigration is its effect on social and government services, which include medical care, education, welfare, policing, and incarceration. Hospital emergency rooms have become the primary care facility for those here illegally. By law, hospital ERs cannot turn away anyone in need. Yet the sheer number of immigrants often clog ER waiting rooms in metropolitan hospitals. When ER beds are filled, ambulance patients are often diverted to more distant hospitals, which can result in worsening conditions or death.

Dallas' Parkland Hospital offers the second-largest maternity service in the United States. In one recent year, sixteen thousand babies were born at Parkland, and 70 percent of them were to illegal immigrants at a cost of $70.7 million. Because few of these patients speak English, the hospital now offers premium pay to medical employees who speak Spanish. This need has forced the University of Texas Southwestern Medical School to add a Spanish language requirement to its curriculum."

The cost of educating the children of illegal immigrants in the United States was estimated at $52 billion in 2010, while the overall cost of all services combined was estimated at $113 billion. This says nothing about the cost in educational quality and efficiency when schools must make special accommodations for significant numbers of students who speak no English.25

Many US cities, counties, and states are facing severe financial shortfalls—even to the point of looming bankruptcy—brought on by the cost of providing free social services to illegal immigrants. This drain on resources may well reach the point that we no longer have the means to provide the blessings that immigrants come here to find. One of the most disturbing aspects of illegal immigration is simply that it is illegal. The apostle Paul was quite emphatic in commanding Christians to obey governmental laws (Romans 13:1-7). He explained that God ordained governments to keep order and protect citizens.

Our national, state, and local governments all have on the books laws that prohibit non-citizens from crossing our borders and living in our communities without proper qualifications and legal documentation. Today those laws are often ignored, usually in the name of compassion. The fact that so many in the United States not only tolerate but also encourage and defend a practice that works outside of the framework of the law should be troublesome.

The danger of encouraging violations to immigration laws goes far beyond the fiscal and societal costs of illegal immigration. It leads to a disrespect of law in general. It fosters the attitude that each individual can decide for himself what laws are just or unjust, which he will obey and which he will ignore.

Among government accommodations to immigration lawlessness is the number of states that are having their voter ID laws struck down by federal courts. With no official proof of citizenship—or even of one's residence—all it takes for non-citizens to vote is a sworn affidavit of eligibility.

Illegal immigrant voting creates a dangerous political imbalance, as those living here illegally are certain to favor the political party that offers them the greatest benefits and least restrictions. This imbalance dilutes and can even override the will of the majority of legal citizens that, according to statistics, lean heavily toward enforcement of US immigration laws in every category."

These are merely samplings of the factors that have generated our current national controversy over immigration. Many fear that uncontrolled immigration is among the destructive forces undermining our nation today, and if it is not addressed, the America we have known faces an uncertain future. One often-expressed fear is that we may be nearing the end of the great experiment in democracy and freedom brought to this continent by our ancestors."

23. Summarized from Jim Kouri, "Illegal aliens linked to rise in crime statistics; Renew America, June 22, 2006,http://www.renewamerica.com/columns /kouri/060622. Based on statistics from the Government Accounting Office, US Department of Justice, and National Security Institute.

24. Summarized from a circulating e-mail confirmed to be accurate by Snopes.com, August 2015:http://www.snopes.com/politics/immigration /parkland.asp.