The Mandate of Biblical Inerrancy, Authority, and Sufficiency: Expository Preaching 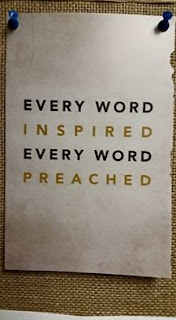 "Preaching ought to reflect our conviction that God’s Word is infallible, inerrant, and If we believe that “all Scripture is inspired by God” and inerrant, must we not be equally committed to the reality that it is “profitable for teaching, for reproof, for correction, for training in righteousness; that the man of God may be adequate, equipped for every good work” (2 Tim 3:16-17)? Expository preaching is the proclamation of the truth of God as mediated through the preacher

Paul gave this mandate to Timothy: “I solemnly charge you in the presence of God and of Christ Jesus, who is to judge the living and the dead, and by his appearing and his kingdom: preach the word; be ready in season and out of season; reprove, rebuke, exhort, with great patience and instruction” (2 Tim 4:1-2, emphasis added). Any form of preaching that ignores that intended purpose and design of God falls short of the divine plan.

The only logical response to inerrant Scripture is to preach expositionally. By expositionally, I mean preaching in such a way that the meaning of the Bible passage is presented entirely and exactly as it was intended by God. Expository preaching is the proclamation of the truth of God as mediated through the preacher.

GOD’S WORD IS INFALLIBLE AND INERRANT

Too often, preaching does not reflect the reality that God’s word is infallible and inerrant. In fact, there is a discernable trend in contemporary evangelicalism away from biblical preaching and a drift toward an experience-centered, pragmatic, topical approach in the pulpit.

Many evangelicals hold to limited inerrancy, but they cannot have their cake (trustworthy Scripture) and eat it too (limited inerrancy). If the Bible is unable to produce a sound doctrine of Scripture, then it is thus incapable of producing, with any degree of believability or credibility, a doctrine about any other matter. If the human writers of Scripture have erred in their understanding of Holy Writ’s purity, then they have disqualified themselves as writers for any other area of God’s revealed truth. If they are so disqualified in all areas, then every preacher is thoroughly robbed of any confidence and conviction concerning the alleged true message he would be relaying for God.

The expositor’s task is to preach the mind of God as he finds it in the inerrant Word of God. He understands it through the disciplines of hermeneutics and exegesis. He declares it expositorily then as the message which God spoke and commissioned him to deliver. As a result of this exegetical process that began with a commitment to inerrancy, the expositor is equipped with a true message, with true intent, and with true application. It gives his preaching perspective historically, theologically, contextually, literarily, synoptically, and culturally. His message is God’s intended message.

THE LINK BETWEEN INERRANCY AND PROCLAMATION: THE EXEGETICAL PROCESS

Inerrancy demands exposition as the only method of preaching that preserves the purity of Scripture and accomplishes the purpose for which God gave us His Word. It demands a faithful bible study process (2 Tim. 2:15) and an expository proclamation (2 Tim. 4:1-5). Only the exegetical process preserves God’s Word entirely, guarding the treasure of revelation and declaring its meaning exactly as He intended it to be proclaimed. Thus, it is the essential link between inerrancy and proclamation. It is mandated to preserve the purity of God’s originally given inerrant Word and to proclaim the whole counsel of God’s redemptive truth."

Article by Pastor John MacArthur. For 50 years Pastor John has been a role model of faithful exposition.  His sermons are broadcasted on the hour, around the world, every day of the week.

Lake Country Bible Church is fully committed to these biblical principles- www.lakecountrybible.org
Posted by ck at 12:00 AM