"The Social Justice Movement is Dangerous and Detrimental to the Church (For These Reasons)!" 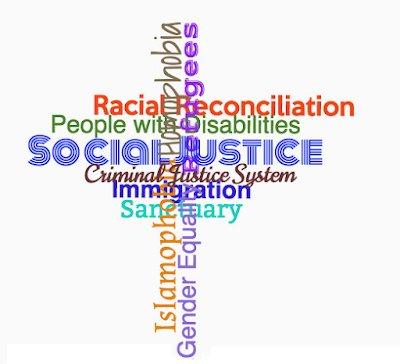 "What I think about when I can't sleep at 3 am- Pastor Don Green writes,

...The preoccupation with so-called social justice in some professing Christian circles is profoundly dangerous and detrimental to the souls of unsaved and saved alike.

Its effect is to teach men to nurse their grievances and perceived injustices on a horizontal level, rather than to fear God for their own sins against Him on a vertical level. It thus preoccupies the thinking of men with passing earthly matters rather than pointing them to the eternal consequences of sin and God’s coming judgment. We badly need a corrective from the perspective of the rich man and Lazarus (Luke 16:19-31).

Furthermore, in the name of the gospel these so-called Christian social justice warriors testify to the world that the biblical message is really not that different that socialistic concerns after all. Rather than “declaring to men that all people everywhere should repent, because [God] has fixed a day in which He will judge the world in righteousness through a Man whom He has appointed, having furnished proof to all men by raising Him from the dead” (Acts 17:30-31), the SJWs drag our dialogue into the muck of current political discourse that will only be swallowed up by the next social cause in a matter of days, weeks, or months.

The pressing matters of personal sin, righteousness, and judgment (cf. John 16:8) are marginalized as men—in the name of Christ, no less—set our minds on earthly things, the end of which is only destruction (Philippians 3:18-19).

Not only that, the spirit of their complaints do something equally insidious to the minds of those who do indeed suffer in this life. Our hope is not—not, I say!!—to batter the perceived elite into submission and extract forced confessions and ultimately financial reparations from them for past wrongs in which they may or may not have personally participated.

No, the great hope of the oppressed is to look up to the risen Christ, who told us in advance: “In this world you have tribulation, but take courage, I have overcome the world” (John 16:33). If we have suffered injustice, we have done so because God in His great wisdom and providence has appointed such sufferings for us so that we would learn not to love this world but to look to that great day when we see Christ face to face and are transformed into His image (1 John 3:2).

Rather than nursing grudges over temporary injustice, men can have a brightly flaming hope in a life to come with Christ rather than walking in bitterness over the life that now is.

And yet still more.

If we as Christians have been forgiven our sins against God, our hearts are taught to have a disposition of forgiveness toward those who have sinned against us in this life. Christ went out of his way to condemn those who asked forgiveness for their debts on the one hand but demanded the last cent of justice from those who had sinned against them: “His lord, moved with anger, handed him over to the torturers until he should repay all that was owed him. My heavenly Father will also do the same to you, if each of you does not forgive his brother from your heart (Matthew 18:34-35).

So.....Far more is at stake in this discussion than the nature of biblical justice and the past wrongs of society. The very nature of the message of the true church of Christ is at stake and what we emphasize as we preach as dying men to dying men.  “The world is passing away, and also its lusts; but the one who does the will of God lives forever” (1 John 2:17).

The passing nature of this world points us not to righting earthly wrongs. After all, we will have injustice and the poor with us always in this life (Matthew 26:11).

Instead, the will of God points men to something of infinitely greater import—a perspective that won’t be welcome on the op-ed page of national newspapers:

“This is the will of My Father, that everyone who beholds the Son and believes in Him will have eternal life, and I Myself will raise him up on the last day” (John 6:40).

If the church can’t understand these basic things, how on earth is the world to see it?"

Pastor Don Green was a former elder at Grace Church (MacArthur), CA.  He is now a Senior Pastor in the Midwest.
Posted by ck at 12:00 AM