The Do's and Don'ts of Teaching Parables (MacArthur) 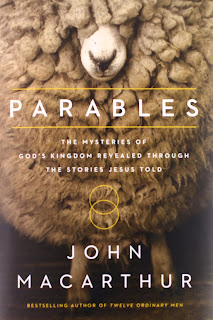 If you want to have John MacArthur as a preaching professor on a regular basis there is only one D. Min program in the world you should enroll in (and that's TMS).  Drs. John MacArthur and Steven J. Lawson are the regular teaching faculty for the Master's Seminary Doctor of Ministry program.  This is one of the reasons why the revamped Doctoral of Ministry track at TMS now has 60 pastors/missionary students.  During one of Dr. MacArthur's final lectures this past summer he talked about the Do's and Don'ts of Preaching Parables.


“The word ‘parable’ (parabole) appears forty-eight times in the Synoptic Gospels (seventeen times in Matthew, thirteen in Mark, and eighteen in Luke).  It is entirely absent in John’s Gospel and is missing in the rest of the New Testament...”[1]  The word comes from two Greek roots: para (beside) and ballo (throw).  Literally, it means "to place alongside."  It suggests a comparison between two things that are alike in some way.

Regardless of what passage or genre one is studying, employing a consistent hermeneutic is the most important component of faithful interpretation.  The student of Scripture must never depart from the grammatico-historical hermeneutic in effort to manipulate the God-intended message of the text, for the meaning of Scripture is the Scriptures (2 Tim. 2:15).  According to MacArthur, Tim Keller misrepresented the major thrust of Jesus' Good Samaritan parable in his best-selling book The Prodigal God.  This kind of thing is not uncommon when it comes to parables.  Many apparently believe you can make parables say anything you want them to say; so long as your conclusions are biblical.  This is simply not true!

What are parables anyways? Parables are word pictures, elongated similes of sorts, almost extended metaphors if you will.  A parable is not an allegory, is generally not complex, and is not ‘story time’ for adults.  John MacArthur puts it like this, “Jesus’ parables were ingeniously simple word pictures with profound spiritual lessons.”[2]  Certain scholars wrongly cite Jesus' parables when advocating for a narrative form of preaching;[3] (against propositional, didactic teaching).

Why did Jesus teach in parables, and how can we interpret them rightly?  Far too many preachers and commentators neglect the historical context when attempting to explain Jesus parables.  Failure on this basic level will have massive consequences.  When the Pharisees began to assert that Jesus performed miracles according to the power of the Satan the Lord began to speak to the crowds in parables.

In Matthew 12, the Pharisees are presented as Legalists for turning the Sabbath into a day of extreme restrictions rather than a day.  After two years Jesus began to use parables (note Mark 4:33-34).  Why? The answer is given to us in Matthew 13:10-17. Our Lord began to conceal the truth from apostate Israel and he did so through the use of parables.  Generally speaking parables make truth less clear for those who have eyes but who do not see (spiritually speaking). According to Jesus in Matthew 13 parables were a form of judgment because the so called people of God (apostate Israel) have, by in large, rejected the clear propositional teaching of Messiah Jesus (note also Luke 12:47).
Having said that, Jesus also used parables to instruct those who possessed spiritual ears to hear.  Believers today continue to benefit greatly from these treasure troves of inspired wisdom.

Having said that, parables were also used by our Lord to help teach those with ears to hear.  Believers can benefit greatly from this inspired riddles with instruction from the Lord (or the inspired text)

Eight general principles you need to know before studying a parable:

1) All parables were gospel illustrations.

Those who understand (1 Cor. 2:16) salvation theology see these truths in the full riches of their reality.  If you are going to teach a parable understand that this is an illustration of salvation in some fashion or another (note for example Luke 10:23f).  Parables are truth clarifying for those who belong to Christ.  This is important in light of principle two.

In many cases (Luke 15) those whom the unbelieving Jews despise most were the very people God was reaching out to rescue in saving grace (“tax collectors and prostitutes”). In Matthew 21 the unbelieving leaders of Israel understand Jesus was speaking about them (in his judgment parable). This proper understanding of a parable by unbelievers is the exception rather than the norm.

3) In the Scriptures their are no allegories with secret meaning.

"A parable is not an allegory like Pilgrim's Progress, in which every character and virtually every plot point conveys some cryptic but vital meaning.  Parables are not to be mined for layer upon layer of secret significance.  Their lessons are simple, focused, without much embellishment " (xxvi).

4) The only one who can explain the meaning of Jesus’ Parable is the author.

Jesus often explained the spiritual meaning to his disciples and in places he does not the context or the inspired human authors of the four gospels do.

6) In most cases parables express one dominant theme or principle.

7) Understanding the context is absolutely critical when interpreting parables.

"Context, context, context!"  "A text without a context is a pretext for a very poor proof text."  Every parable has a context which is critical especially when dealing with a story where the interpretation is not directly stated.  Sequential exposition prevents many errors because you have a grasp of the biblical context.

Luke 15 is a classic example of how one must interpret parables in context in order to rightly divide the word of truth; (Luke 15 demonstrates the heart of God is to go to those who are lost; prodigal sons and daughters).

8) Once you go outside the four gospels you will never find another parable.

The apostles did not teach using parables.  Why? Because no apostle could pronounce Divine judgement (only God's Son could do this).  Parables are unique to Christ (see point 2).  Preachers today are not told to teach in parables.

A parable is a fictional story invented by Jesus.  For example in Luke 15 we encounter a God who is infinitely gracious and astonishingly merciful to undeserving sinners; (that's the main point of the Good Samaritan).


CONCLUSION: Preachers today are not told to teach in parables; rather they are commanded to “preach the word” (2 Tim. 4:2).  Having said that, when the faithful student of Scripture examines the whole counsel of God they will encounter Jesus’ parables and will therefore need to know how to interpret them properly in order to rightly apply them.


Question and Answer session with Pastor John MacArthur: After his lecture on parables John MacArthur opened up the class time for questions and answers.   One question was asked about Tim Keller in view of MacArthur's criticism concerning the way Keller mishandled the text of the Good Samaritan; (MacArthur reviewed Keller's book on preaching during a lecture last semester).

Regarding Tim Keller- MacArthur noted that Keller often answers questions with "complete fog" when a clear and direct biblical answer is warranted.  MacArthur said a sad example of this is found on the Veritas forum when Keller is asked a number of questions only to mumble and stumble in his reply; note this; this)   "He (Keller) is sort of an American version of N.T. Wright."  He seems to be drifting more and more.  This is quite concerning since Tim Keller is very influential among the Gospel Coalition crowd.

Regarding the current Trinitarian Civil War-  "It seems to me that eternal subordination and eternal generation language sound like an oxymoron."  The essential thing is to support the eternal Deity and eternal oneness of the Triune God.   "Do not try and unscrew the things that are inscrutable."  God is infinite and we are finite (Deut. 29:29).  MacArthur's first systematic theology textbook is scheduled to be released by the end of 2016 and he will address many of these Trinitarian dilemmas in this book.

How to be a faithful expositor over a lifetime of preaching?  Be fully prepared every time you step into the pulpit and never stop reading spiritually healthy books.  We must replenish our spiritual wells regularly and often especially if you stay at the same church for a long time.  You want to be faithful to the text and yet remain "fresh."

[1] Richard N. Longenecker, The Challenge of Jesus’ Parables (Grand Rapids, Mich.: Eerdmans Publishing Co., 2000), xi.  Many scholars do not view the examples in Hebrews as "parables."

[3] This errant application of parables is made by Eugene L. Lowry, The Homiletical Plot: The Sermon as Narrative (Louisville: Westminster John Knox, 2001).  To pit story against doctrine or narrative against proposition is neither right nor safe.  The fruit of postmodern deconstructionism is presented in many "evangelical" books.  Church leaders and church members alike need to proceed with caution when utilizing study guides on parables.