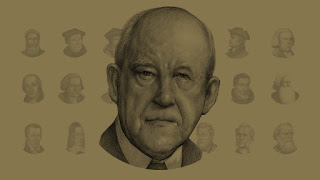 In July 1959, Martyn Lloyd-Jones and his wife, Bethan, were on vacation in Wales. They attended a little chapel for a Sunday-morning prayer meeting, and Lloyd-Jones asked those present, “Would you like me to give a word this morning?” The people hesitated because it was his vacation, and they didn’t want to presume on his energy. But his wife said, “Let him. Preaching is his life” (Martyn Lloyd-Jones, 373). It was a true statement. In the preface to his powerful book Preaching and Preachers, he said, “Preaching has been my life’s work . . . to me the work of preaching is the highest and the greatest and the most glorious calling to which anyone can ever be called” (17).  For thirty years he preached from the pulpit at Westminster Chapel in London. Usually that meant three different sermons each weekend: Friday evening and Sunday morning and evening.

At the end of his career, he remarked, “I can say quite honestly that I would not cross the road to listen to myself preaching” (Preaching and Preachers, 14). But that was not the way others felt. When J.I. Packer was a 22-year-old student, he heard Lloyd-Jones preach each Sunday evening during the school year of 1948–1949, and he said that he had “never heard such preaching.” It came to him “with the force of electric shock, bringing to at least one of his listeners more of a sense of God than any other man” (Five Evangelical Leaders, 170).

Lloyd-Jones’s path to Westminster was unique. He was born in Cardiff, Wales, on December 20, 1899. He moved to London with his family when he was 14 and went to medical school at St. Bartholomew’s Hospital, where he received his MD in 1921 and became Sir Thomas Horder’s chief clinical assistant. The well-known Horder described Lloyd-Jones as “the most acute thinker that I ever knew” (Five Evangelical Leaders, 56).

Between 1921 and 1923, Lloyd-Jones underwent a profound conversion. It was so life-changing that it brought with it a passion to preach that completely outweighed his call as a physician. He felt a deep yearning to return to his native Wales and preach. His first sermon there was in April of 1925, and the note he sounded was the recurrent theme of his life: Wales did not need more talk about social action; it needed “a great spiritual awakening.” This theme of revival and power and real vitality remained his lifelong passion (Five Evangelical Leaders, 66).

He was called as the pastor of Bethlehem Forward Movement Mission Church in Sandfields, Aberavon, in 1926, and the next year married one of his former fellow medical students, Bethan Phillips. In the course of their life together, they had two daughters, Elizabeth and Ann.

His preaching became known across Britain and in America. It was popular, crystal clear, doctrinally sound, logical, and on fire. In 1937, he preached in Philadelphia and G. Campbell Morgan happened to be there. He was so impressed that he felt compelled to see Lloyd-Jones as his associate at Westminster Chapel in London.

Lloyd-Jones and G. Campbell Morgan were joint ministers until Morgan’s retirement in 1943. Then Lloyd-Jones was the sole preaching pastor for almost 30 years. So many people were drawn to the clarity and power and doctrinal depth of his preaching that in 1947 the Sunday morning attendance was about 1,500 and the Sunday evening attendance 2,000. He wore a somber black Geneva gown and used no gimmicks or slap stick humor to hold his audiences attention. Like Jonathan Edwards two hundred years before, he held audiences by the sheer weight and intensity of his vision of truth through his careful exposition of Scripture.

Lloyd-Jones became ill in 1968 and took it as a sign to retire and devote himself more to writing. He continued this for about twelve years and then died peacefully in his sleep on March 1, 1981.

From the beginning to the end of his life, Lloyd-Jones’s ministry was a cry for depth in two areas — depth in biblical doctrine and depth in vital spiritual experience. Light and heat. Logic and fire. Word and Spirit. Again and again, he would be fighting on two fronts: on the one hand, against dead, formal, institutional intellectualism, and on the other hand, against superficial, glib, entertainment-oriented, man-centered emotionalism. For Lloyd-Jones, the only hope of a lasting solution was historic, God-centered revival.

When true revival happens, it is not just a quiet subjective experience in the church. Things happen that make the world sit up and take notice (see the early chapters of Acts). This is what was so important to Lloyd-Jones. He felt almost overwhelmed by the corruption of the world and the weakness of the church. And believed that the only hope was something stunning.

The Christian church today is failing, and failing lamentably. It is not enough even to be orthodox. You must, of course, be orthodox, otherwise you have not got a message. . . . We need authority and we need authentication. . . . Is it not clear that we are living in an age when we need some special authentication — in other words, we need revival. (The Sovereign Spirit, 25)

Revival, for Lloyd-Jones, was a kind of power demonstration that would authenticate the truth of the gospel to a desperately hardened world. What lay so heavily on Lloyd-Jones’s heart was that the name of God be vindicated and his glory manifested in the world. “We should be anxious,” he says, “to see something happening that will arrest the nations, all the peoples, and cause them to stop and think again” (Revival, 120).

Lloyd-Jones had enough extraordinary experiences of his own to make him know that he had better be open to what the sovereign God might do. For example, Stacy Woods describes the physical effect of one of Lloyd-Jones’s sermons.  In an extraordinary way, the presence of God was in that Church. I personally felt as if a hand were pushing me through the pew. At the end of the sermon for some reason or the other the organ did not play, the Doctor went off into the vestry and everyone sat completely still without moving. It must have been almost ten minutes before people seemed to find the strength to get up and, without speaking to one another, quietly leave the Church. Never have I witnessed or experienced such preaching with such fantastic reaction on the part of the congregation. (Martyn Lloyd-Jones, 377)

Lloyd-Jones knew from the Bible and from history and from his own experience that the extraordinary working of the Spirit defied precise categorization. He said, “The ways in which the blessing comes are almost endless. We must be careful lest we restrict them or lest we try to systematize them over much, or, still worse, lest we mechanize them” (Joy Unspeakable, 243).

What is Lloyd-Jones’s counsel to us as we try to navigate between uncritical and unbiblical gullibility on the one side and Spirit-quenching resistance on the other?

His basic counsel is this that we “cannot do anything to produce” true revival and therefore must labor in prayer, be patient, and not set time limits on the Lord (Joy Unspeakable, 139, 231, 247). But it seems that there is more that we can do than only pray. Elsewhere, Lloyd-Jones mentions his appreciation of a prayer from D.L. Moody that asks for “a prepared heart” (Joy Unspeakable, 220). If a prepared heart is important, then there are means of grace besides prayer that cleanse the heart and conform it more and more to Christ. One thinks of meditation on the Scriptures, exhortation from fellow Christians, mortification of sin, and so on.

But not only that, Lloyd-Jones teaches that the Spirit can be quenched by certain forms of barren institutionalization. Concerning the deadness of formal churches, he says,  It is not that God withdrew, it is that the church in her “wisdom” and cleverness became institutionalized, quenched the Spirit, and made the manifestations of the power of the Spirit well-nigh impossible. (The Sovereign Spirit, 50)

Now that is a powerful statement from one who believes in the sovereignty of the Spirit — that certain forms of institutionalization can make the manifestations of the Spirit’s power “well-nigh impossible.” If the Spirit in his sovereignty suffers himself to be hindered and quenched, as Lloyd-Jones (and the apostle Paul!) says, then it is not entirely accurate to say that there is nothing we can do to open the way for his coming. It is only that we cannot constrain him to come. Or to put it another way, while it seems we cannot make the Spirit come in unusual measures of power, we can do things that usually keep him from coming.

Lloyd-Jones sets us down the right path in one of his many beautiful closing exhortations:  Let us together decide to beseech him, to plead with him to do this again. Not that we may have the experience or the excitement, but that his mighty hand may be known and his great name may be glorified and magnified among the people. (Revival, 117)

This article is an edited version of an article that was originally published at Desiring God.
Posted by ck at 7:38 AM