Fight the Good Fight of Faith as a Faithful Christian Soldier; (Heeding the Call of Christ Our Captain) 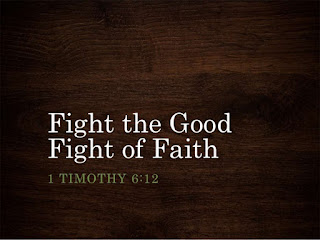 One should never engage in a theological controversy simply for the sake of a good fight.  However, the holy Scriptures does call true pastors "to fight the good fight of faith as faithful Christian soldiers" (see 2 Timothy 2). In addition to passages like this that are addressed specifically to church leaders every believer is commanded to "contend earnestly for the faith that was once for all delivered to the saints" (Jude 3-4).  Failure to comply to the clear instructions of Scripture is to disobey the one true Head of the Church (see Col. 1-2).  The Captain of the Lord's (spiritual) army is none other than Jesus Christ!  Where He sends we must go. What He commands we must do.  We are after all bond-servants (not independent contractors or self-serving mercenaries).  In short, we are not at liberty to pick and choose which parts of the New Testament we will follow and defend and which parts we will skip or disregard.  If and when the gospel itself is in question silence is not an option (see Galatians 1-2).

Tragically, the contemporary church seems to think nothing of it when passages (such as the ones listed above) are routinely ignored; often under the so called banner of "love," "unity," and "tolerance." As one who has grown up in the American evangelical church I have witnessed time and time again the accuracy of the following quote.  "The doctrinal ignorance of the Evangelical church is shocking (think Eph. 4:11-15; Heb. 5:12-14), matched only by its cowardice I fear."

Consider the inspired testimony of the New Testament Scriptures beloved.  The following three biblical examples come to mind:  1) When the Apostle Peter began to act in manner contrary to sound doctrine the Apostle Paul was moved by the Holy Spirit to confront Peter to his face.  Go back and re-read Galatians 2:11-21.  If Peter himself was not above biblical confrontation neither is the Pope, a Pastor, a church member.  This is not to say we should act hastily in this process as Galatians 6, 1 Timothy 5:19 so remind us...but now I digress.

2) An entire inspired book of the Bible went from being an encouraging epistle celebrating our "common salvation" in Christ, to a deadly serious letter confronting religious Trojan horses, false doctrine, and unbiblical behavior.  Read the book of Jude...it is after all only 25 verses.  Though John 3:16 is a critically important verse we would do well not to ignore the later epistles.  I am thinking specifically now of Galatians, 2 Peter, 1-3 John, and Jude.  A ministry that is devoid of polemics is not New Testament Christianity.

3) In the Lord Jesus Christ seven letters to seven local churches in Revelation 2-3 Jesus praises the church of Ephesus for "your deeds and your toil and perseverance, and that you cannot tolerate evil men, and you put to the test those who call themselves apostles, and they are not, and you found them to be false; and you have perseverance and have endured for My name’s sake, and have not grown weary."  In start contrast, those who call out theological error or who draw up doctrinal boundaries are looked down upon by many within the professing evangelical church.  Matthew 7:1-5 is probably the most misapplied verse in the entire New Testament.  "Judge not, lest you be judged" we're often told.  Compare Matthew 7 with 1 Corinthians 5 and Matthew 18:15-17 and you will no doubt see exactly what I mean here.

In this same series of inspired letters the Lord publicly rebukes the church at Pergamum for doing something that is widely accepted today- and what's that?  The sinful toleration of false doctrine.  Revelation 2:14-17a.  But I have a few things against you, because you have there some who hold the teaching of Balaam, who kept teaching Balak to put a stumbling block before the sons of Israel, to eat things sacrificed to idols and to commit acts of immorality. 15 So you also have some who in the same way hold the teaching of the Nicolaitans. Therefore repent; or else I am coming to you quickly, and I will make war against them with the sword of My mouth. He who has an ear, let him hear what the Spirit says to the churches.

Having disconnected ourselves from the past, modern day American evangelicals often forget that every precious doctrine of the Christian faith that we hold dear has been passed down to us through a trail of tears and blood.  William Tyndale for example, was martyred for the crime of printing the Holy Bible in the English language.  Heaven forbid that ordinary lay people have access to the Scriptures in their own language; so that they can know for certain that what their church leaders tell them is in fact biblical and true (see Acts 17:11).  One also thinks of some other "heroes of the faith" such as Polycarp, Justin Martyr,  Hugh Latimer and Nicolas Ridley, and Lady Jane Grey.

The courageous example of the saints of old (see Hebrews 11:1-12:3) inspires and convicts me of what the Lord God requires of each generation of believers.  Namely: "Guard the deposit!"  "Fight the good fight!"  "Exhort in sound doctrine AND refute those who contradict it!"  "Contend earnestly for the faith!"  "Preach and teach these things!"  "Pay close attention to your life and your doctrine!"   "Suffer as a good soldier of Jesus Christ!"  "Endure suffering for the sake of those who are elect."  "Protect what has been entrusted to you!"

May all who come behind us find us faithful, or in the words of the Gettys;

“O church, arise, and put your armor on; Hear the call of Christ our captain.
For now the weak can say that they are strong
In the strength that God has given.
With shield of faith and belt of truth,
We’ll stand against the devil’s lies.
An army bold, whose battle cry is love,
Reaching out to those in darkness.
Our call to war, to love the captive soul,
But to rage against the captor;
And with the sword that makes the wounded whole,
We will fight with faith and valor.
When faced with trials on every side,
We know the outcome is secure.
And Christ will have the prize for which He died:
An inheritance of nations."

Labels: confronting error, contending for the faith, cowardly compromise in the name of so called unity and peace, Onward Christian Soldiers, the Fight of Faith
Newer Post Older Post Home