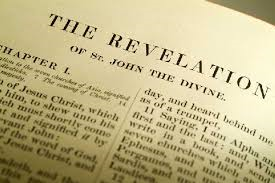 John MacArthur on the how and why of preaching the end of the story (Revelation).
(D. Min lecture delivered on 7/19/16 at TMS):

"My Premillennialist convictions can be summarized in one sentence.  Their will be future salvation of national Israel after the unrepentant rebels are purged (Zech. 12-14) and their will be a future reign of Christ upon the earth (Psalm 2; Rom. 9-11; Rev. 20)."

If you reject the literal grammatico-historical method of interpretation the book of Revelation is going to take on a thousand different interpretations.  This partially explains why commentaries written by non-Premillennialists interpret Revelation so many different ways.

If you think Christ is glorified in the Old Testament, the gospels, and the epistles you would be absolutely correct.,,But the place Christ's glory shines brightest and fullest is in the book of Revelation.

To ignore this book is unacceptable.  It's to have a story without an ending.

MacArthur is convinced the book of Revelation is one of the easiest book to interpret if you maintain a consistent hermeneutic.  Dr. Floyd Hamilton himself admitted that if you employ a (consistent) hermeneutic to Revelation that you will be a premillennialist.

A question was posed to John MacArthur, "Why is their such hostility against premillennialism?"  Pastor John believes Antisemitism has been the driving factor towards rejecting premillennialism (see Future Israel: Why Christian Anti-Judaism Must Be Challenged).  He also admitted that some of the unnecessary baggage has come from the old Scofield study bible.  In light of some unnecessary interpretations many people threw the baby out with the bathwater.  Wacky Dispensationalism needs to rejected; (such as the errant view that Matthew 5-7 is all about future kingdom living); or  "My hope is built on nothing less than Scofield's notes and Moody Press."


Practical suggestions on working your way through Revelation: John testifies to the Word of God and the testimony of Jesus Christ to all that he saw (Revelation 1:1-3).  The exalted glory of Christ in His fullness is revealed in the final book of the Bible.  If you love preaching about our exalted Lord this is a great book!

General Overview of Revelation: John's initial response to the exalted Lord in Rev. 1 reminds us of how the disciples reacted on the mount of Transfiguration and how the prophet Isaiah responded in Isaiah 6.

The original recipients of John's prophetic book were the seven churches of Asia Minor (Rev. 1:4).  In Revelation 2-3 the "Lord of the church" addresses 7 actual churches.  These congregations also represent the kinds of churches (and professing Christians) that exist throughout church history.  The range of churches in the first century is not different than what you find in the twenty-first century.

In view of Revelation 2.  The biggest temptation in the contemporary church is that we might lose our consuming love for Christ.  So many megachurch leaders talk about everything but Christ.  Give me Christ!

When you come to chapter four you move from earth to heaven and the scene changes drastically (Rev. 4:1-5:14).  For the record, the Church is not mentioned again in the entire book of Revelation (from chapter 4f).  MacArthur sees this as one proof in support of the rapture of the Church (see also 1 Thess. 4:13-18; 1 Cor. 15; and Rev. 3:10)  The saints in heaven are singing the song of the redeemed (Rev. 5:9-10) in view of the atoning sacrifice of Jesus Christ.

In Revelation 5 the great Hero of heaven (my terminology) opens the Title Deed of the Universe.  Jesus is the Lion and the Lamb who is worthy of all of our praise.  One day the people of God will reign with Christ upon the earth (Rev. 5:10).  This again demands a future reign of Christ upon the earth (see also the future promise of Christ in Matthew 23:37-39)!

Revelation 7 highlights the future salvation of Israel (the 144,000 are the first fruits of God's future salvation of the entire nation- Nore Zech 14:7-9; Rom. 11:26).  Why spell out of every tribe if this passage isn't highlighting Jewish salvation why mention in detail every tribe (see Rev. 7:1-8)?  Finally, the redeemed of Israel will be the witness people God called them to be (Rev. 7:9-17).  This will lead to various Gentile conversions around the world.

After the breaking of the seventh seal their is silence in heaven for half and hour as "heaven catches it's breath."  After this comes seven more devastating judgments (trumpet judgments).  The whole earth is now in complete disarray (note Rev. 8-10).

In chapter 11 two evangelistic witnesses are mentioned (see Because the Time is Near for an overview of chapters 12-15).  In chapter 16 you have rapid fire bowl judgments poured out against unbelieving humanity.  In chapter 17 and 18 you have a description of the world system and the world economy (Babylon) and every remaining unbeliever will rise in war against the Lamb (see Ch. 17:14). In chapter 19 their is a four fold Hallelujah in praise of the victorious Christ.    The marriage supper of the Lamb is also depicted in Rev. 19:1-10.  Rev. 19:11 presents the return of the King (of kings).  The glorious Conqueror coming to establish his kingdom on earth and the eternal kingdom of God and Christ (Rev. 19:11-20:3). Armageddon is predicted in Rev. 19:17-21 and the Great White Throne Judgment and Final Sentencing at the Great White Throne is described (note Rev. 20:7-15)   Rev. 21-22 highlight the new heavens and the new earth in the eternal state (see Isaiah).  This is the glorious Revelation of Christ and the good news "end of the story" conclusion.   The only logical response to this Revelation is AMEN, COME, LORD JESUS, COME!!!

This is a phenomenal time to preach the book of Revelation.  The unveiling of Christ and the future reign of the King (Psalm 72) are glorious themes!

Many scholars make much of the "Apocalyptic genre" to justify their non-literal interpretations often because they want to maintain their eschatological presuppositions (Preterism, Amillennialism, etc).

70 AD (Preterism) cannot stand up under a straightforward reading of the book of Revelation.

Preach the entire book of Revelation in one or two overview messages before diving down into the details.  Give your people the big picture first!  The sum often helps us understand the interconnected parts.

The Reformers gave us an amazing legacy as they fought the good fight and upheld the 5 Solas.  They did not invest much time and energy on eschatology.  Calvin for example, wrote a commentary on every book of the Bible but Revelation.